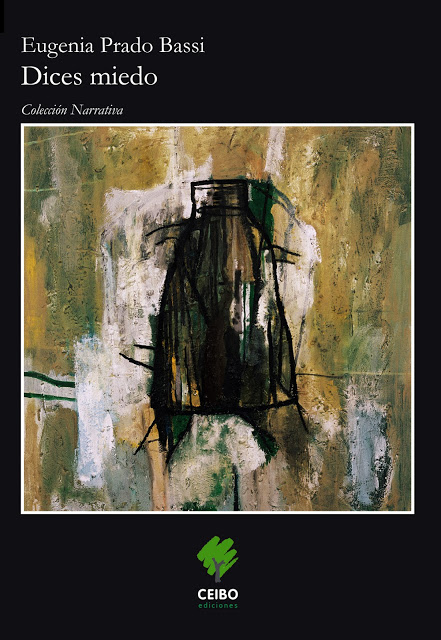 Eugenia Prado
A woman killed her husband inflicting several stabs in the chest and belly, the man died due to the penetrating wounds. The couple lived in a house under construction. The crime was committed in the bedroom. According to declarations from a neighbor, the woman was already facing grave problems with the victim due to her jealousy. She also declared that often you could hear fights and yelling. Along with the body the knife which he was killed with was found. Until now it hasn’t been established with accuracy in what way the events happened. Say fear, get closer to your fear. Then think of the meaning of your own fear, more than what it means to you. Fear of losing it, losing you, of the radical way in which you lose yourself in that losing. Fear of being afraid, of being alone, of him loving somebody other than you, of him wanting another and not you and losing his mind over her. Fear that he would make love to her and connect with that sexual energy and lose himself in her. The fear to stop doing, to stop creating, to stop loving, to stop thinking with the logic of understanding. The fear that your life is him and not you and that everything in you is postponed. Fear that because of that fear he’ll stop loving you, wanting you, desiring you. The fear of being afraid and of the dependency with which it impassions you, imprisons you, even without wanting it, because this exists far from him, it lives in you, the fear of dependency that it provokes in you is yours.And when that fear of mine grows and settles itself inside, it’s as if I didn’t know how, where as if I was paralyzed and didn’t have more energy to move forward and I walk in circles thinking that by doing so I’ll stop being terrified.  I discover that movements are the only way. Then I force myself to not faint, to contradict discouragement, to do more than feel, anything, anything but running from this sensation that destroys me. The fear that in my dreams, during the night, those same images will haunt me. And I prepare the house and make the house, I clean and I tidy the house, I change it and I dress as a house and on the finger I look at the ring which confirms it. I am the house, I pretend to be the kids of the house, I pretend to be a perfect and happily habited house, with kids filling it, the emptiness of the house when you’re not present. Out of fear I make love. I need to do it all the time to calm myself and this sinister dependency. Then I run in any direction to feel free, and I am and I feel free, they are moments, flashes.Morbid jealousy is in the top three causes of intentional homicide with known motive. It has to do with your belongings. They are people who are incapable of controlling their impulses or delirious and/or paranoiac thoughts about their object of obsession. The patient experiences extreme jealousy, and from a particular subjectivity confirms, in the attitudes of their partner, their fearsome certainties. In cases of morbid jealousy, the patients suffer from extreme anxiety and are convinced that their partner is unfaithful, when in the majority of cases, these ideas aren’t true. They’re made up. Little demons incrusted in the mind.

First Interrogation Doctor: How are you feeling?

Doctor: Do you know why you’re here?

Patient: No, I don’t have a clue

Doctor:  I’ve been asked to do an evaluation of your case,  you’ll be staying with us for a while.

Doctor: I understand perfectly, I had to administer some medication, but don’t worry, in a couple of days you’ll feel much better.

Patient: I just want to sleep.

Doctor: In your case, given the graveness of the situation, I think you should at least try to remember

Patient: Remember what doctor? What do you want to know?

Doctor: Do you know why you’re here?

Patient: NoDoctor: You are not trying at all.

Patient: Why do you insist? I’m tired.

Patient: He brought me here to get rid of me.

Doctor: Who? Your husband?

Patient: Of course, who else?

Doctor:  Don’t you know? Your husband is dead.

Patient: I have to get ready doctor, he hates waiting

Doctor: aren’t you listening to me? He is dead

Patient: Lies! You are lying

Doctor: Dead, alright. It is why you are here with us now.

Patient: Shut up! That’s not true. I didn’t kill him. I swear. I don’t want to keep listening to you. Fear that looks and shivers… that’s why I am here… fear of losing myself… of the radical way in which I lose myself in that losing… just that… fear… it’s the fear… my own fear…

Doctor: Violent crimes happen in the name of jealousy. Did you know that? Women who kill others or themselves because of love when the fear ()

Patient: Don’t go on, I am begging you. I need to get out of here, I can’t take it anymore.You participate in the change. You leave. You act as if it hasn’t been brutal. You simply disappear from the world you shared yesterday, a month ago, and a few weeks. You make those who participated with in the experience diluted. Like a plant, ripped from its root, you () in dreams that promised appetizing fruits, every time less appealing. The generous damage grows. Faded memories of these images appear every now and then to haunt you. Your fingers, moist to advance on the surface adhere to an earth which expulses you. Even when the mistakes are evident, you cling to that (). The instance keeps you alive. Puncturing wounds in the torso and limb. The cold body. His cold bod, not yours. His blood soaking the sheets now. Like a plant that can’t manage to grow in a territory of losses, you recklessly advance against all, right there where life perils. Say bye with intermittence to the state of a sinister memory, you thrash the bonds that in previous scenes that submitted both of you to that cruelty. Both of you knew that was a deprived construction and that the fall would be imminent, yet you kept knitting the unavoidable debacle. Any space in the future became unthinkable. Denied everything, you learned to resist the fury of mistreat threaded in your skin. Destroyed. You could see him destroyed, yet you didn’t stop. Then, the scream. The blood soaking the sheets. There is no compassion. It’s the fear. Your own fear, the jewel that would shine from the measly shadows, a mirror for your apparent winks. Fear that he might love another, that he lose himself in her when you see him lying.So you forced him to take those pills, and when he was completely sedated you made the first cut on the neck. Then came the scream. His pain, his body moving violently between the sheets. Then everything became white, like a plant that can’t manage to grow in a territory of losses, surrounded by that stench, you expanded your fury at your own will. Satisfied, with each new cut you drew sacrifices on the fragility of his skin. There was no going back. There were entire days with dead landscapes and desolate deserts. He reminded you old stories of other kids.Aware of those losses, of the wound that won’t heal, limply you were accustoming to all the spaces, until your life together was completed with dead matter, soon before falling into the dark abyss, you suffered in that great languish. You hated yourself. You hated yourself all the time, stuck to that skin of a man that failed. Trapped in the wrapping, you imagined yourself dead as an example of a sinister hunt. You hallucinated. Resuscitated from the remains, both, exalted your delicacies. Nothing would be the same again, a force had already concentrated in them. Then, the fear become intolerable. Then, your reborn joy of containment, looking to become nothing more than what you have. 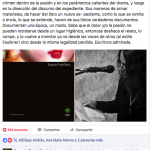 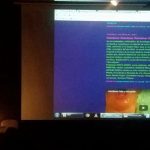